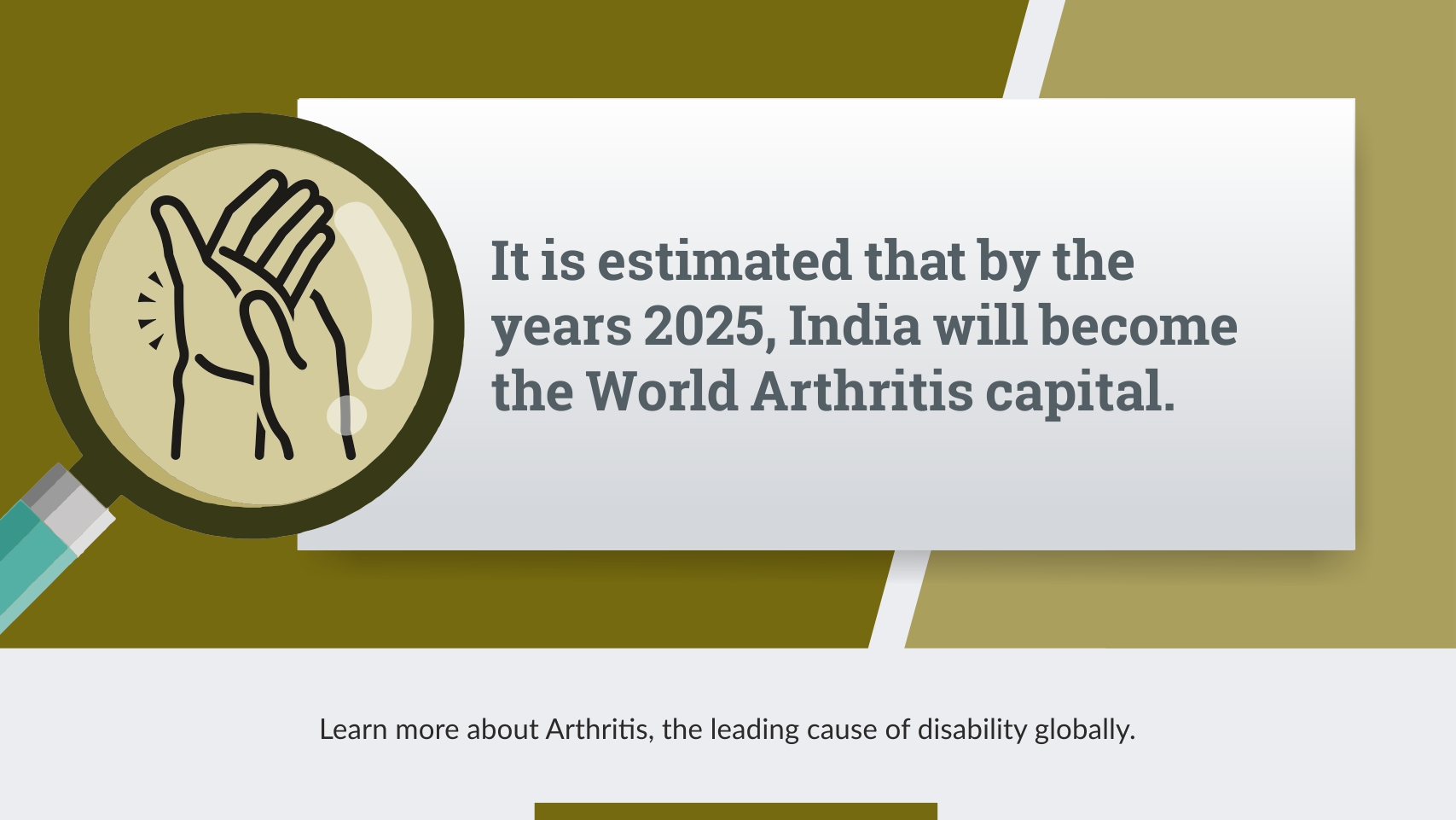 “Arthritis is a very common disease but not well understood. The word “arthritis” actually comes from the Greek words: “arth” and “itis”. “Arth” means joint and “itis” means inflammation. There are many kinds of arthritis with many causes. Arthritis can be caused by inflammation, injury, or infection. This inflammation can cause swelling, pain and stiffness amongst its patient. Sometimes an inflamed joint can also feel hot or look red. Some common symptoms can be pain in knees, joint pain in fingers, difficulty to walk, etc.

You might be surprised to know that “arthritis” is not a single disease; it is just an informal way of referring to joint pain or joint disease. People across the world of all genders, caste and creed suffer from Arthritis, and it is the leading cause of disability in the western world as well as in India.

Arthritis is so commonly prevalent, that many people don’t even agree to seek treatment for arthritis until the symptoms become unbearable for them. Even if we talk about patients with doctor-diagnosed arthritis, it is indicated that approximately 54 million adults and almost 300,000 children suffer from arthritis or other type of rheumatic disease. This does not include the people who have reported joint pains which can be consistent with the diagnosis of arthritis. This just shows us that millions of people go untreated, and don’t even report suffering from arthritis. [1]

While researchers try to find more accurate ways to estimate the prevalence of this disease and the burdens it causes, let’s talk about the symptoms and causes of arthritis and how can we overcome it.

What are the common symptoms of Arthritis?

Swelling, pain, stiffness and decrease in range of motion are often commonly reported symptoms of arthritis. Severe symptoms leave the patient helpless and dependent on others for daily duties. It is difficult to understand the progression of the disease as the symptoms may come and go, may be mild or moderate. They might stay the same over the years or can worsen very fast. Symptoms such as joint pain in fingers can be so intense that they can make it difficult for the patient to walk or climb stairs or even hold things.

Many people don’t know but Arthritis can cause permanent joint changes in the patient. These changes may be visible, such as knobby finger joints, but often the damage can only be seen by X-ray. Some types of arthritis also affects other body parts, like the heart, eyes, lungs, kidneys and skin.

Who are more prone to suffer from Arthritis?

Age is the most common reason for Arthritis. As people start entering their 60s, their joints get worn out making them more susceptible to Arthritis. While Arthritis can affect anyone, there are 4 sections of people who are more prone to suffering from Arthritis.

As mentioned earlier, Arthritis is a blanket term for any kind of joint pain. There are three major types of Arthritis that is widely prevalent.

Osteoarthritis is also known as OA, degenerative arthritis or degenerative joint disease. OA causes cartilage to break down. It is the most common kind of arthritis. It can be caused by aging, injury, being overweight, overusing a joint or from a poorly formed joint that you were born with. The most common symptoms of OA are stiffness and pain. These symptoms most often are in the hips, knees, back, neck and finger joints. It is more common in women than men.

Psoriatic arthritis is arthritis with psoriasis. Psoriasis causes scaly dry patches to form on the skin. Arthritis causes pain and swelling in many joints. These symptoms come and go.

Juvenile arthritis is any kind of arthritis that begins before the age of 18. There are many forms of childhood arthritis. One form is called Juvenile Rheumatoid Arthritis (JRA). The childhood forms are a little different from the adult forms.

While medications, surgeries and physical therapies can play an important role in helping reduce the effects of symptoms in day to day life, the lifestyle modifications like healthy diet, regular exercise and maintaining a healthy weight play an important role as well. One should start adopting this lifestyle in their younger years so as to reduce the effects of symptoms of Arthritis in later days. It is a painful disease, but fighting it can be pretty simple.”