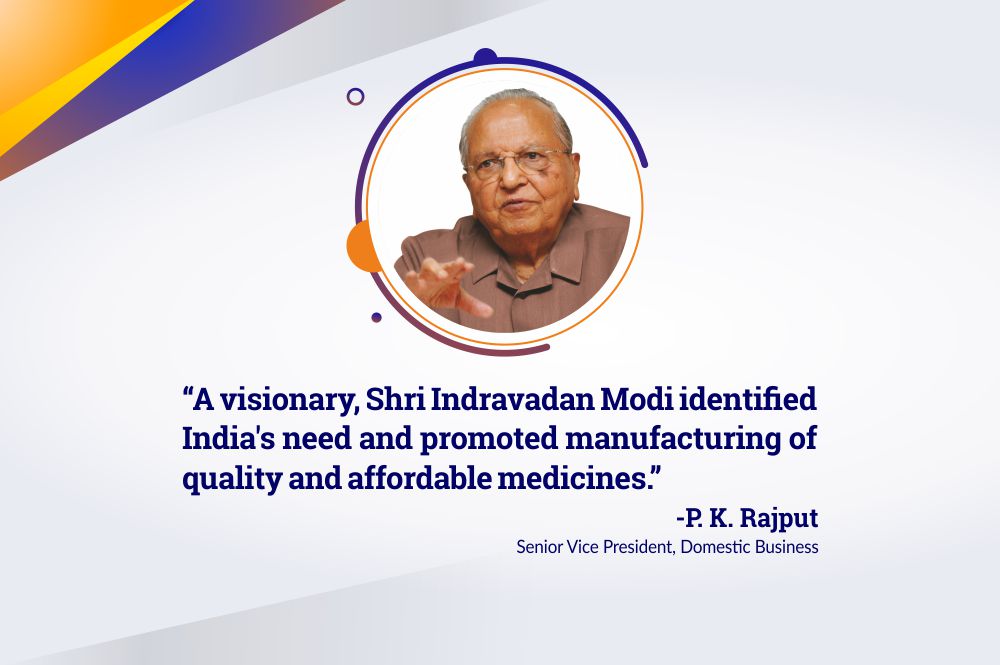 The values and lessons one learns from your initial journeys, are often life altering, helping you make an impact in the world. Shri I. A. Modi, the medicine man of India, was one such leader who changed the pharmaceutical industry in a matter of few years. Having brought up in a small village, Shri Indravadan Ambalal Modi saw hardships from the beginning. Having lost a cousin to poor healthcare facilities in the village, he realized the lack of quality and affordable healthcare practices in the country. Working on this, Shri I. A. Modi went on to build one of India’s largest privately held pharmaceutical organizations. We asked Mr. P. K. Rajput, Senior Vice President, Sales and Marketing who has been part of Cadila’s journey for the last 38 years on his experiences working with Shri I. A. Modi and how working with him, moulded the way he worked.

“Shri I. A. Modi was a one man army in the initial days. While his wife Smt. Shilaben Modi, who was also the first employee of Cadila Pharmaceuticals, would pack the medicines in their small flat, he would go on to distribute these medicines on his bicycle. He would interact with the doctors personally while trying to understand their needs even long after he was a business tycoon. When one interacted with him, there wasn’t even a single trace of pride in him. You would feel right at home while talking to him. Working for a few years, directly with him, these are some of the lessons I learned.

Even when Cadila had a good brand recollect amongst the audience, he would still go and meet doctors to understand their needs and concerns. His ever-so humble demeanour captivated the customers and they would feel right at home with Shri I.A. Modi. He would always keep in mind the needs of his customers. He was a man of his word and believed in serving his customers ethically. He was very charismatic and a customer who once met him, would never forget him. Doctors and customers would trust him since he was proficient with product knowledge including the product, production, mode of action, quality and cost. Having done the ground work, he could identify the challenges in the healthcare industry and work towards solving them.  He taught us to build relationships with the customers and keep nurturing for a mutually beneficial relationship. Since he came from a humble background, he was never afraid of working alongside his team, which actually led to the success of Cadila Pharma.

He was a brilliant leader. He had the great ability to understand and analyse a person very quickly enabling him to feel the person at ease. He would encourage his team to move ahead with confidence and would empower them to achieve goals. He was a very approachable leader, a quality he acquired while working with a small team to establish the organization. Since his team and employees believed in him and felt attached to him at a personal level, Cadila Pharmaceuticals became a huge family, where everyone care for each other.

As a thought leader he continuously pushed the envelope and worked for improving the pharma industry. A visionary, Shri Indravadan Modi could foresee what the needs of a country like India were and promoted manufacturing of quality and affordable medicines within the country. We can see this vision getting translated today as India is quickly becoming the centre of the pharma world.

He gave utmost importance to hard-work. Since it had helped him build Cadila Pharma to what it is today, he understood how important a role does hard-work play in success. While establishing the organization, it is said that he would work 18 hours a day, stopping only to sleep and eat. He lead with example, and hence hard-work is one of the core qualities that can be found in the Cadila employees. His motto of making quality and affordable medicines for everyone in the world can only be fulfilled with hard-work and determination.

I was amongst the lucky ones to have worked with Shri Indravadan Ambalal Modi. He was a brilliant visionary and his hard and smart work, determination and dedication to his work was truly inspiring. A lot of young entrepreneurs today can learn so much from his success story. He wanted to make India the pharmaceutical hub for the country and worked each day to make this dream happen. While he was hard-working and encouraged his team to give a 100% into their jobs, he would also take out time to interact with even the junior-most employees. His humility and down-to-earth attitude was infectious and reminds me every day to walk on his path, inspiring me to keep working towards fulfilling his vision.