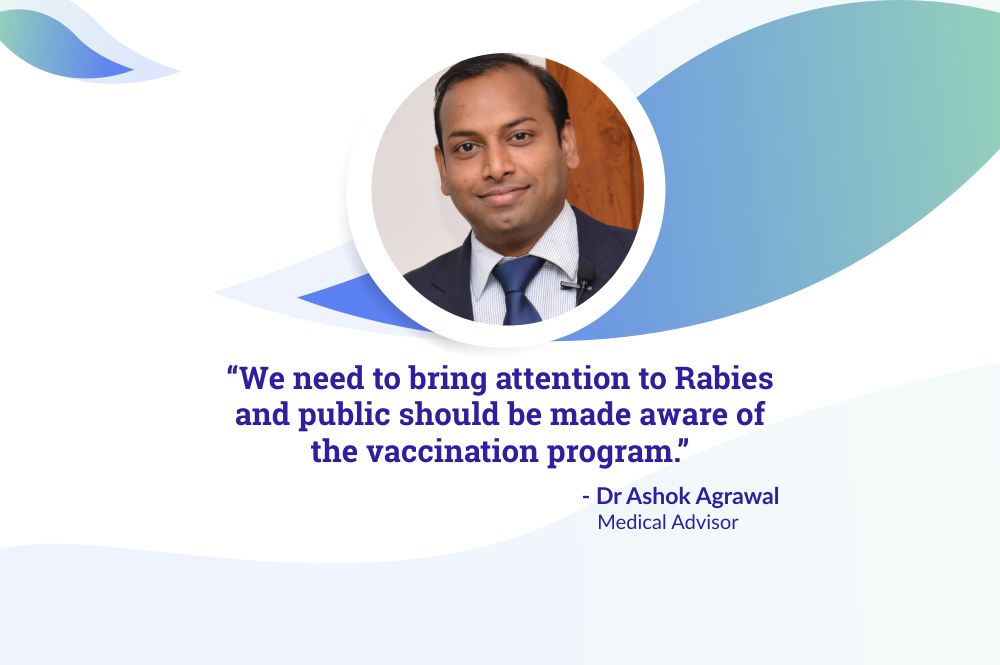 Rabies has been one of the oldest zoonotic diseases that have affected humans, with records dating back to around 4000 years. Till date it remains the most lethal disease with case fatality rate of close to 100%. While the disease is highly fatal once the symptoms appear, it is also 100% preventable. Rabies still has a lot of taboo attached to it where people are not aware of the consequences of Rabies or that Rabies vaccine can prevent the disease. We talked to Dr Ashok Agrawal, Medical Advisor, Cadila Pharmaceuticals on more details about Rabies, this World Rabies Day.

“Rabies virus (RABV), the prototype virus of the Lyssavirus genus is by far the most common causative agent of rabies and is most readily transmitted by the bite of an infected mammal including dogs, wolves, foxes, coyotes, jackals, cats, bobcats, lions, mongooses, skunks, badgers, bats, monkeys and humans. However, thanks to the modern medicine, Rabies is 100% preventable and the spread can be controlled by proper vaccination of humans and source animals, such as dogs.

India is estimated to have the highest incidence of rabies globally, with 30,000 of the world’s 50,000 cases reported each year. India has 36% of the global and 65% of the Asian rabies burden in terms of cases. Someone is bitten by a dog every two seconds in India and someone dies from Rabies every 30 minutes on average. But because Rabies is not a notifiable disease here, the actual burden is likely to be even greater. Control of rabies is a priority for the Indian government but the population remains vulnerable because of shortages of anti-rabies vaccine and once symptoms appear, dog Rabies virus is universally fatal in humans. It hence, becomes our duty this World Rabies Day, to raise awareness about this disease and reduce the burden of this disease.

Symptoms of Rabies in animals

If such behaviours is observed in animals near you, local authorities should be immediately informed for protection of the animal as well as humans around.

Symptoms of Rabies in humans

The first symptoms of rabies may be very similar to those of the flu including general weakness or discomfort, fever, or headache. These symptoms may last for days. There may be also discomfort or a prickling or itching sensation at the site of the bite, progressing within days to acute symptoms of cerebral dysfunction, anxiety, confusion, and agitation. As the disease progresses, the person may experience delirium, abnormal behaviour, hallucinations, hydrophobia (fear of water), and insomnia. The acute period of disease typically ends after 2 to 10 days. Once clinical signs of rabies appear, the disease is nearly always fatal, and treatment is typically supportive.

No specific treatment has proved effective. Rabies of canine origin remains 100% fatal in unvaccinated people. Rabies vaccine is usually given after exposure to a possibly rabid mammal.

When a human is bitten by an animal, they should immediately consult a doctor for proper treatment.

Rabies is a vaccine-preventable disease. Rabies vaccine for dogs is the most cost-effective strategy for preventing rabies in people. Dog vaccination reduces deaths attributable to dog-mediated rabies and the need for post-exposure prophylaxis as a part of dog bite patient care.

The general public should be made aware of vaccination programmes, timely post-exposure prophylactic treatment, and avoidance of traditional, non-scientific, harmful treatment methods such as rubbing chilli powder in wounds, incantations, and taking ineffective herbal medicines.

Since 2007 World Rabies Day has been observed every year on 28th September to bring this neglected disease to the attention of doctors, the scientific community, governments, the media, and the public.

What to do if bitten by a rabies infected animal?

Rabies vaccine can be used for pre-exposure prophylaxis (PrEP) as well as post-exposure prophylaxis (PEP). The primary pre-exposure immunizing course is three doses of rabies vaccine given intramuscularly at 0, 7 days, and 21 or 28 days. PEP is begun immediately after an exposure. Before initiating anti-rabies treatment, one should establish the category of the animal bite. PEP consists of a regimen of one dose of immunoglobulin (passive immunization) depending on category of the animal bite and five doses of rabies vaccine which can be given intramuscularly at 0, 3, 7, 14 and 21 or 28 days. Alternatively, vaccine can be given intradermally also. Human rabies immunoglobulin (RIG) should be infiltrated around the wound and any remaining portion should be administered intramuscularly, preferably in the gluteal region.

A disease that is 100% fatal and also 100% preventable should be taken with utmost seriousness, but rabies remains a neglected disease at all levels. It is essential for the government and public to ensure that rabies vaccine for dogs is given to all stray and pet animals to reduce the exposure of the virus in humans. Secondly, awareness has to spread far and wide to help everyone understand the grimness of Rabies and so that they can get the right medication at the right time. With joint efforts by humans and government, we can essentially eliminate this disease.