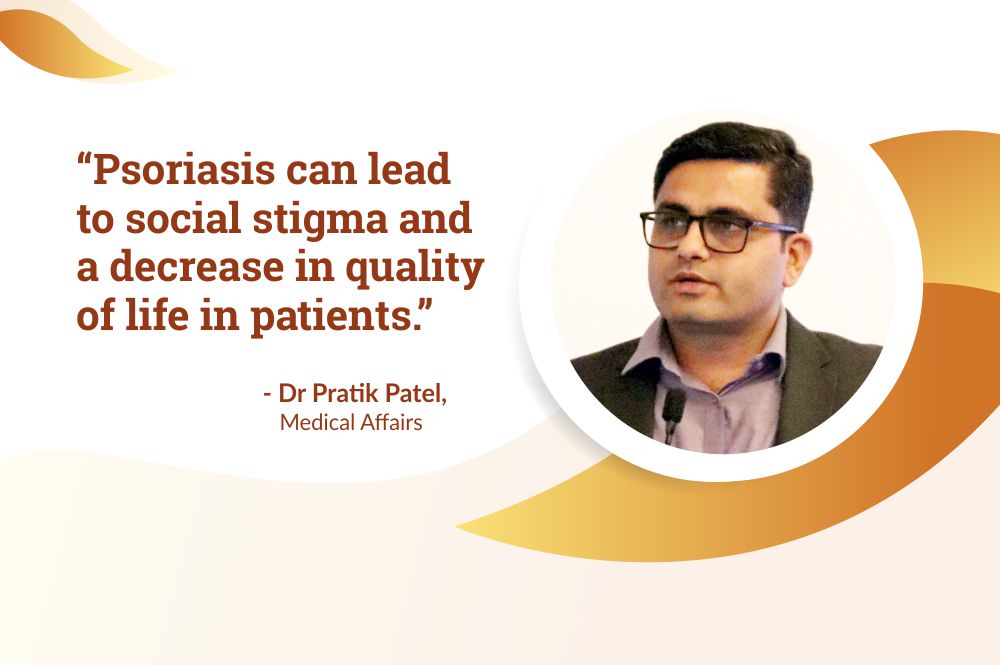 According to the International Federation of Psoriasis Associations (IFPA), Psoriasis affects nearly 3% of the world population. Most often mistaken as a skin condition, it is an immune condition that can have a physical and psychological impact. People affected with psoriasis often face discrimination and embarrassment in public places simply because others fear that it is contagious, when in fact, it is not.

August is celebrated as Psoriasis Awareness Month, to educate the public and dispel myths associated with the disease. We asked Dr Pratik Patel to educate us about psoriasis and what all one needs to know about this disease.

“Psoriasis is a chronic, inflammatory, immune‑mediated proliferative skin disorder that commonly involves the skin, nails, and joints. Psoriasis on neck and legs is also common. It accelerates the process of skin replacement i.e. the usual process of new skin growth which typically takes three to four weeks but in Psoriasis, can happen in just a few days. The skin cells grow too quickly, causing them to pile up and form visible patches or spots on the skin.

Psoriasis varies from person to person and can be limited to a few lesions or affect large areas of the skin. These lesions are not contagious, neither are they infected nor are an open wound.

The skin is a complex organ made up of several different layers. The outer layer of skin (the epidermis) contains cells which are formed at the bottom and then move up towards the surface, gradually changing as they go, finally dying before they are shed from the surface. This process normally takes between 3 and 4 weeks. In psoriasis, the rate of turnover is dramatically increased within the affected skin, so that cells are formed and shed in as little as 3 or 4 days. There is also inflammation and blood vessel proliferation on the affected skin; the reasons for these are still not fully understood.

Some people are more likely to develop psoriasis than others, particularly if there is someone else in their family who has psoriasis: in other words, it is a genetic or hereditary disease. However, the trigger for psoriasis to appear is often an outside event, such as a throat infection, stress or an injury to the skin.

In practice, for most patients who develop psoriasis, or for whom it clears and then comes back, no obvious cause can be detected. Usually, sunlight improves psoriasis, though occasionally it makes it worse (especially if the skin gets burned).  A high alcohol intake and smoking can worsen psoriasis too, as can medicines used for other conditions – such as lithium, some tablets used to treat malaria, and other drugs such as beta-blockers (medicines commonly used to treat angina and high blood pressure).

Yes, but the way it is inherited is complex and not yet fully understood. Many genes are involved, and even if the right combination of genes has been inherited psoriasis may not appear. Other features of the inheritance of psoriasis are:

Psoriasis is not life-threatening, however with itself, it carries a lot of stigmas. People affected by Psoriasis face discrimination which affects their self-confidence and hampers their experiences in life. To completely eradicate this bias, it is important for us to be educated about the disease to reduce the myths around the disease.

Read about other healthcare disorders here: