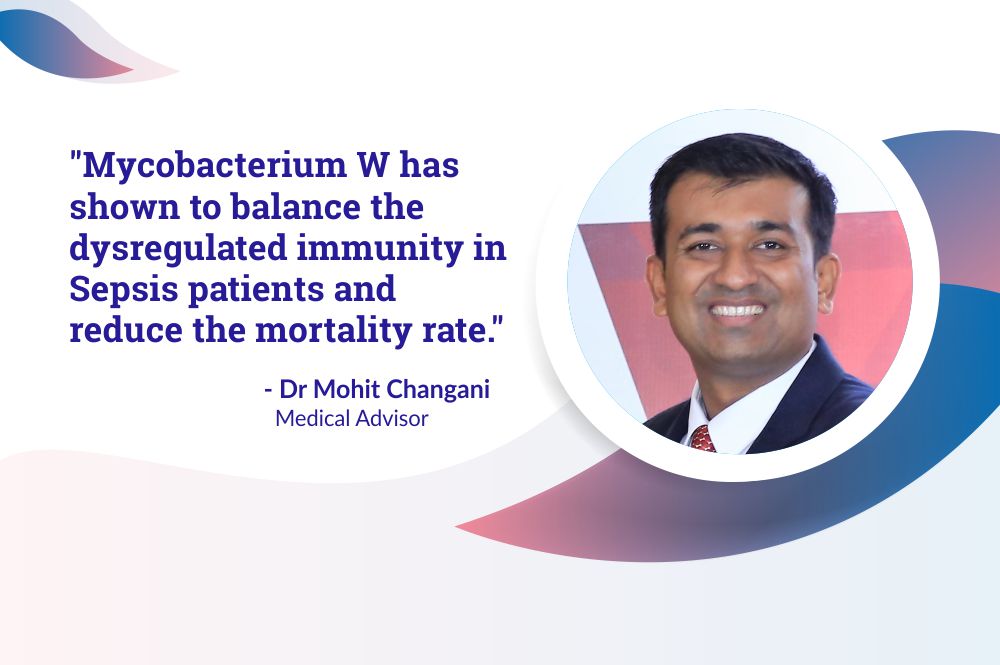 Sepsis, worldwide, claims millions of lives. Sepsis accounts for 6% to 30% of all intensive care unit (ICU) admissions with a mortality rate of 10% to 80% depending on the severity1 and sepsis is responsible for nearly 20% of the deaths worldwide.2 With sepsis factoring for major number of deaths across the globe, few people know about sepsis and how is it caused. Lack of knowledge makes sepsis the number one preventable cause of death worldwide. We asked Dr Mohit Changani, about sepsis and its leading causes.

“Sepsis is a deadly disease associated with high mortality. Sepsis would commonly present as a complication of the common and preventable infections like pneumonia, abdominal infections or urinary tract infection. Patients who are admitted to hospitals, particularly in ICU, are more prone to developing this “hospital acquired infection” and if left untreated, may later prove to be fatal. Sepsis treatment options still remain a challenge for doctors across.

According to World Health Organization (WHO), diarrheal diseases (9.2 to 15 million annual cases) and lower respiratory tract infections (1.8-2.8 million annually) were the two main contributors to the sepsis related mortality during the year 2017.3 According to a global study, the death rate due to sepsis in India is 2nd highest as compared to other countries of South Asia. As per the same study, the sepsis death rate is 213 per 1, 00,000 people in India.4

Sepsis is an inflammatory response of the body to the infection which goes out of control. To fight against any foreign particle, human body reacts by building up an inflammation at the local site. In order to initiate and establish the inflammation, body requires certain chemicals known as cytokines. These cytokine are responsible for all the changes during inflammation.

In sepsis, the production of these cytokines goes out of control and they are produced in very high amount. These overly produced cytokines enter the blood stream and spread all over the body. They resultantly trigger inflammatory reactions in various parts of the body which ends up in multiple organ failure if not controlled. This condition is commonly termed as “cytokine storm” by the medical community. Thus, the cytokines originally produced for the clearance of the infection, in excess, will result in life threatening sepsis. Because of this hyper inflammatory state, coagulation system of the body gets activated which results in multiple clots hampering the blood circulation of the vital organs of the body. This also contributes to the prevailing organ damage and dysfunction.

The dysfunction that occurs in the body during Sepsis is very similar to what is seen in COVID-19 patients also. In the recent pandemic, cytokine storm has been designated as one of the core reasons for mortality.

How to treat Sepsis?

How to treat sepsis has remained one of the major questions in the medical fraternity. The Drug Controller General of India (DCGI) has recently approved Sepsivac (heat killed Mycobacterium w), an innovation by Cadila Pharmaceuticals for the treatment of gram negative sepsis. This is a revolutionary product containing Mw which is a known immunomodulator that has been used previously for the treatment of other diseases like tuberculosis, leprosy as well as non-small cell lung carcinoma. Mycobacterium w is known to stimulate the first line of the defense of the person, cell mediated immunity. It is also known to bring in the balance in the dysregulated immunity present in the patient of the sepsis. Inclusion of mycobacterium w in the treatment of sepsis along with the standard treatment has shown to reduce the mortality in the patients up to 55%. It also has been shown to reduce other parameters related with the disease like the hospital and ICU stay of the patient, ventilator requirement, overall organ dysfunction and resultantly the cost burden of the disease on the patient. During the long track record of more than 15 years, Mycobacterium W (Mw) is found to be “extremely safe in patients and no systemic side effects are associated with its use”.

Sepsis is a multimodal disease which involves multiple process along with the bacterial infection. Even if these infections are taken care of by using antibiotics, the inflammatory process has already begun and the patient’s recovery becomes difficult. Currently, there are many antibiotics available that can eradicate even multi drug resistant organisms, but very few options are in the market currently to deal with the inflammatory part. In such a scenario, use of mycobacterium w for the treatment of sepsis can save multiple lives across the globe.”

Read about Sepsivac and Sepsis:

Disclaimer: This article contains medical information and should not be treated as advice. If you have any specific questions about any medical matter, you should consult your doctor or other professional healthcare provider.